As audio playback shows some results to deter elephants, we were considering using them for protecting crops (https://www.researchgate.net/publication/301708132). As most of the elephants are poached in the park, they know the Ak-47 sound and are afraid of it. The idea is to use the AK-47 shots sound combine with an elephant fear vocalisation (as the ones available on elephantlisteningproject). The advantage of this combination is that elephants should not start to be used to the sound because they are really threatened by it during their lifetime in the park. We could also other sound combination involving elephant and AK-47.

In our, Park Hyenas are also hunting young elephants so this sound could also be used alternatively.

The idea is to have these devices (number depending on the size of the crop) around crops and when the elephant is passing the edge of the crops its trigger the audio pre-recorded sound. The trigger system could be a rope cross the elephant path connected to the audio device.

The device should be battery powered or solar (but high chance of getting stolen), should be waterproof and powerfull.

In India, WRCS used a digital alarm connected to a string, but I did not find battery powered alarm system with the possibility to modify the sound displayed. (https://www.youtube.com/watch?v=7rPfFTi_Elg)

So, I would like to know if you have an idea on how to build or buy a similar system?

Hi. We built a low power MP3 playback system for doing research on fear response with wild animals in the Serengeti. It's an open source design and we should be posting up the design docs and code soon. We're just finishing up some bug fixes and editing the newest revision. The project is called Boombox. PM me if you want more details on it. We're doing a writeup but can discuss potentially adapting this for what you're talking about. 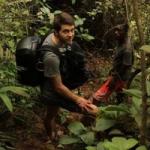 I've worked on a similar project to try to scare lions away from bomas in Kenya that's pretty much a bunch of stuff from Adafruit rigged together with cheap marine speakers in an overly complicated custom case (picture is of previous generation, new generation in development). We also run LEDs to show various light displays. I imagine you could imitate a muzzle flash to deepen the illusion of gunfire. I'm also happy to discuss things (although I don't think I can match the technical expertise of Freaklabs).

Suraci et al. have published a few papers about the use of an automated behavioral response system for sound playback when triggered by a camera trap. Their methods (see supplementary materials) are entirely open source and I even commissioned an engineer to make a few for me. The only issue is that the MP3 players need a separate battery pack to keep them charged or need to be charged weekly, as the sound runs continuosly since there would otherwise be a delay between the camera trigger and the MP3 player being turned on. This could probably be fiddled with to suit your needs, if the previous options don't work out.

We actually designed Boombox, the audio player shown above, based on the ABRS system by the Suraci paper and with Dr. Meredith Palmer. We made some optimizations on it since the paper advocates an approach to infer when the camera was triggered. We reverse engineered our camera traps and took the actual trigger signal from the trailcam PIR motion sensor. Later, we were contacted by one of the authors of the paper and he mentioned they had come to the same conclusion.

We built the MP3 playback system using a discrete MP3 decoder IC which allowed us more control over playback, power management, and we could pick out the output amplifier to drive the speakers. We knew we would need to put the system to sleep and immediately play sounds on wakeup which most players aren't suited to do.

We also made it so that it's solar rechargeable with lithium-ion batteries so that it could last in the field as long as possible. Unfortunately we couldn't use that feature because there's no point in outlasting the trailcams. But for this application, it seems we might be able to use the solar recharging functionality.

We've volunteered for a possible TechTutors season 2 workshop on open source MP3 playback and recording with Arduino.  We're waiting to discuss it with Steph and Ellie. If this sounds interesting, please let us know.