Heej everyone, I am a Dutch student currently conducting a camera trap study in Costa Rica. I will be comparing density estimates of mammals between line transect surveys and camera trap data. One of the cameras is not working properly and I hope one of you can inform me about the reason why. The images are completely white, there are no signs of moving objects or animals in the image. Before this the images were often extremely white but still I could see which animals triggered the camera. I checked wether this could have been because of sunlight shining into the camera but even when the camera was pointed towards a darker background it stil produced complete white images. It is a  Trophy Camera Brown, Bushnell with model number 119636.  I hope someone can provide me with possible explanations for this. If you need any more information, please ask me. Thanks in advance! Grtz. Marissa

It sounds like the Iris on the lens may be stuck open or its been drifting into an open position (hence why you could see images for a while, but now the image is completely whited out). Is there the ability to alter the lens Iris on the camera?

If you can view what the image looks like directly from the camera (is there an ability to view the fiield of view as you set thecamera up?) you should  see the same problem if the Iris is wide open.

Try and isolate the problem step by step to rule out each element of the technical system, whenever you have a technical fault.  In this instance there isnt much that you have to play with on a simple trail camera. It would seem the power supply is OK because images are being captured (even though they are whited out) and the PIR is functioning to trigger the images. Check the SD card you are using works OK in another camera to rule that out as the problem too. Are the settings on this camera the same as others that are working correctly? If not alter them too.

There is also a detachable anti reflective LED cover on this Bushnell. Check its not been slipping over time and bouncing the LED illumination directly into the camera lens. That would white images out to varying degrees too. 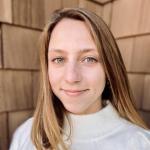