This account is managed by the WILDLABS Team. Tag us or DM whenever you need help from our community team.

The tag is a significant advancement in researchers’ ability to observe key whale behavior events, identify important habitat and better understand whales’ response to human activity such as ship traffic or military sonar, said Daniel Palacios, endowed associate professor in whale habitats at OSU’s Marine Mammal Institute. For the last 30 years, the institute has been a leader in the development and use of satellite tagging on whales.

As shipping traffic increases, whales across the globe are at increased risk of being struck by large vessels. The upper 30 meters of the water column – the vertical expanse that stretches from the water’s surface to the ocean floor – is considered the “danger zone” for whales passing through shipping lanes.

“One of the benefits of these new tags is that they give us information about how much time whales are spending within the danger zone throughout their migration,” Palacios said. “With that information, we can identify areas of higher risk and make more informed decisions to help protect them from the threat of ship strikes.”

The ability to monitor dive behavior and detect changes could also have applications for measuring how whales respond to sources of loud sound, such as sonar used by the U.S. Navy, he added.

The tag, known commercially as the RDW, also could have applications for new areas of research, including marine mammal physiology, behavior, ecology and conservation. The features and benefits of the new tag are described in a paper published recently in the journal Animal Biotelemetry. 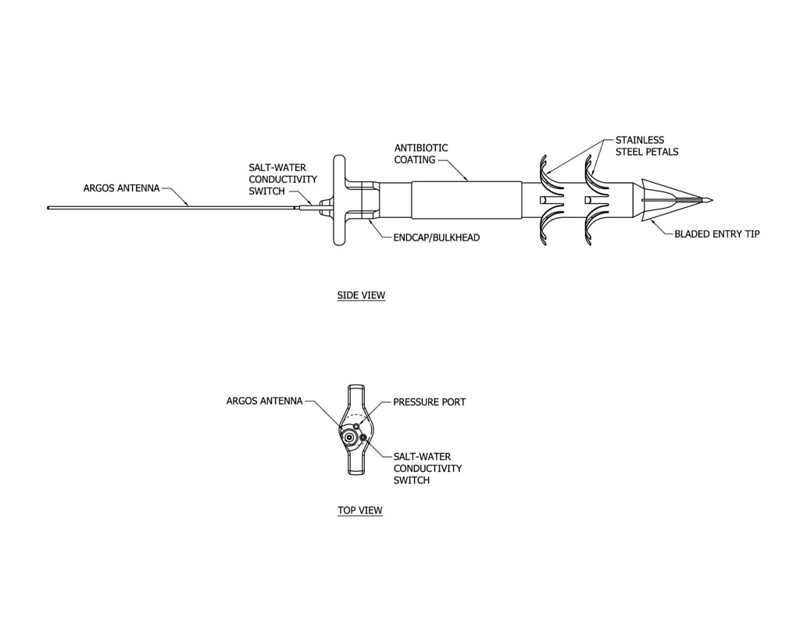 “Studying anything, whether it is a plant, animal or even something like our solar system, relies on our ability to observe it,” said paper co-author Ladd Irvine, a senior faculty research assistant with the Marine Mammal Institute, part of OSU’s College of Agricultural Sciences.

“Whales spend the vast majority of their lives underwater, where we can’t see them. They can move more than 100 kilometers in a day, so typical methods of observation aren’t reliable for keeping track of where they are going or what they are doing. Tags allow us to ride along with the whales as they go about their lives, similar to a fitness tracker or smartphone app.”

In the past, technological limitations have prevented long-term tracking of whale feeding behavior. When lunge-feeding, a whale will dive deeply and consume a large quantity of prey and water, then filter out the water. Previous satellite tracking devices could monitor their horizontal movements, but not their behavior while diving.

Working in partnership with the manufacturer Telonics, Inc., Oregon State researchers developed the new RDW tag to incorporate pressure and accelerometer sensors that will allow them to monitor more of the whales’ movements, including lunge-feeding, via satellite for multiple months.

Software in the tag creates a behavior summary for every dive and transmits the data via satellite. The software also adapts over time to better detect key events in the accelerometer data.

“This new system allows us to monitor the feeding behavior of baleen whales over much longer periods of time than was previously possible with other types of tags,” Irvine said. “In the past we’ve been able to monitor the long-term movements of whales, but this additional information helps us better understand what they are doing in those places in 3D.”

The new tags, which are implanted in the whales’ blubber, were tested on 14 blue and 14 humpback whales off the coast of Southern California. Data collected from the tests was similar to what a simulation produced, confirming their effectiveness.

Former Marine Mammal Institute Director Bruce Mate is a coauthor of the paper. Mate, now retired, pioneered the study of whale movements using satellite tags in the late 1980s. The new tag is a direct result and progression of Mate’s work, Palacios said.

“Before the advent of tagging, we could only get glimpses into the lives of the whales when they surfaced or by following individuals for a few hours at a time,” Irvine said. “It was like trying to watch a theater production in the dark, where someone would flip the lights on for a few seconds every now and then. By tracking whales across weeks, months and even over a year of their lives, we are now able to put together a more complete picture of the lives of whales.”

Additional co-authors include Barb Lagerquist of the Marine Mammal Institute; James Fahlbusch of the Hopkins Marine Station at Stanford University; John Calambokidis of the Cascadia Research Collective and Stanly Tomkiewicz of Telonics, Inc.

About OSU's Hatfield Marine Science Center: The center is a research and teaching facility located in Newport, Ore., on the Yaquina Bay estuary, about one mile from the open waters of the Pacific Ocean. It plays an integral role in programs of marine and estuarine research and instruction, as a laboratory serving resident scientists, as a base for far-ranging oceanographic studies and as a classroom for students. In addition to Oregon State researchers and students, its campus includes research activities and facilities from five different state and federal agencies.